Our profession is too reticent in exploring and applying new models and techniques. This is a missed opportunity, because Artificial Intelligence cannot do without Actuarial Intelligence.

There are almost as many definitions of Artificial Intelligence (AI) as there are people. For the remainder of this article we will define AI as a system that can learn to assess new situations based on examples. Such systems function thanks to algorithms trained using machine-learning techniques (including Deep Learning).

Many people regard Artificial Intelligence as ‘something new’. However, it has been more than 60 years since the then 28-year-old mathematician John McCarthy organised the famous Dartmouth research project on AI. Two years later he developed Lisp, a functional programming language that would become popular for developing AI systems and is still used today. At the end of the seventies, a computer defeated the Backgammon world champion (Luigi Villa). In the eighties the existing static models were extended with machine learning methods. In the nineties you could buy a master-level chess computer for a few hundred guilders!

The above shows that the underlying techniques of AI systems have existed for several decades. The breakthrough was achieved when the growing availability of data and computer power (Figure 1) made it possible to use these techniques for practical applications. From the laboratory to the supermarket, from the study room to the living room. Whereas in the nineties it was still quite a challenge to get a neural network up and running, training and validating such a network now only requires a few lines of code. Thanks to the strong rise of automated machine learning platforms, the time needed to actually bring these types of models into production is significantly reduced. 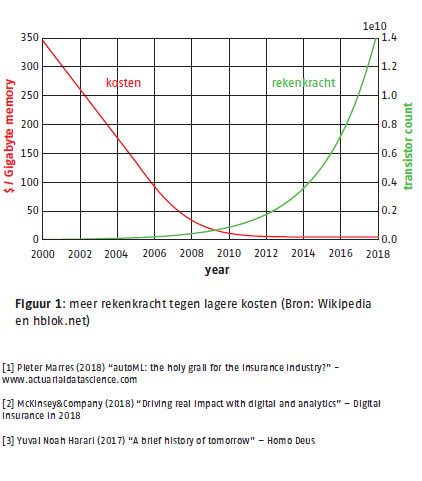 In the coming years, insurance products will be offered at an accelerated pace by parties who have fully digitised their processes. They are able to   use AI systems such as chatbots effectively to optimise the client experience while maintaining the human touch. Companies such as Lemonade in the United States and Nexible in Europe have been setting the pace for several years now. In addition, technology players such as Google and Amazon will use their global distribution network to offer insurance products covering ‘new’ risks of digitisation and data management. Because they are in continuous contact with the potential end client, they are able to offer pay-as-you-go products and services at the right time. Providers of transport concepts such as the self-driving car will be ready to insure certain risks ‘free of charge’ in exchange for data. The Digital Insurance Forum 2018 showed that tomorrow’s ‘winners’ are ready to invest heavily in new technology based on an integrated client strategy. They make clear choices and keep a close eye on the progress of their digital transition on the basis of comprehensible KPIs. Insurers will move with this changing environment by working more closely with new partners (insurtechs) as part of a larger ecosystem and fulfilling new roles within this as director and supplier of ‘active’ insurance products.

Like other technologies, AI is not an end in itself. The fact that something is interesting and innovative does not automatically make it useful. Only when it contributes to achieving the strategic goals of an organisation does it become useful. An insurer that wants to move closer to the end client decides, for example, to use AI to remove friction in the claim process. Moving from damage handling to damage prevention. To successfully complete such a transition, the insurer does not begin with technology, but with the client’s experience. This can be done for, example, by mapping the customer journey.

Contribution of the actuary

Recent collaboration with some data scientists has convinced me that as a professional group we can make a fundamental contribution to the developments in AI. In terms of content, we have a solid foundation in linear algebra and statistics, and a solid foundation for understanding the machine learning models – the brain of every AI system. From that foundation we are not only able to interpret the outcomes of the models, but also to translate them back to the original business problem. We know that each model, often tacit, is based on a large number of assumptions and can indicate its impact. Ultimately, AI is not about building complex models, but about solving a problem with the help of data. We are able to show what the solution means for the client’s operating result.

AI can help people make better choices, from insurance to a film or a new partner. That’s great, but like any technology, AI can also be used for purposes that can harm humans. It is said that AI will lead to a large useless underclass, the ‘have-nots’, or even to a digital dictatorship. As a professional group, we have the responsibility not only to reflect on this, but also to make our position known where necessary.

Put a few people together and let them talk about AI; about the hype & buzz, not the use. Within the team, the actuary offers a healthy counterbalance to this from a positive critical attitude. At the same time, a good actuary realizes that they can learn a lot from teammates and data scientists. Data-driven thinking. Hacking skills. New tools. Open source knowledge sharing. An ‘everything-is-possible’ mindset. By remaining true to their own roots and at the same time being open to new perspectives, actuaries fulfil a valuable bridging function within the team between domain, content and client.

AI has long since ceased to be only a future possibility. The technology is already influencing the choices of millions of people every day. With a positive-critical and curiosity-driven attitude, actuaries can make a substantial contribution to this interesting development as part of a multidisciplinary team. In short: with Actuarial Intelligence.

Do you want to cooperate with Triple A?

Do our themes appeal to you and is our culture exactly what you are looking for? Take a look at our vacancies. We are always looking for talent!